I was listening to an impromptu interview on BBC Radio 2 this morning between DJ Chris Evans and his not so secret guest Martin Talbot. They were both enthusing about the current vinyl revival which seems, as much as anything, to be driven by today’s teenagers. Having hit rock bottom in 2007, when sales in the UK were around 200,000 a year it seems that sales of vinyl albums in the UK are likely to hit 2,000,000 in 2015.  This music medium has become so popular that there is now a dedicated chart to track the sale of vinyl recordings. Martin Talbot, described on the radio “as chief in charge of the official charts company”, said that there has been so much enthusiasm for the biggest selling vinyl albums of the year that they have decided to broadcast official weekly charts dedicated to the format that will count down the top 40 best-selling singles (including both 7in and 12in formats) and albums.

I must admit that I still have a collection of mid-70’s to early- ’90’s singles in my loft and was somewhat surprised to find that once again moderately priced record players are on sale in some of the well known High Street stores. Urban Outfitters (OU) sell a vast range of home furnishings and accessories, many of which have a mid-century influence. 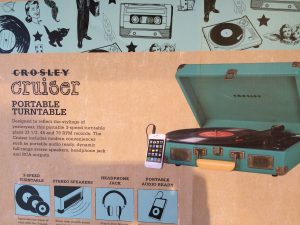 They have the coolest looking range of portable and static retro style record players in an assortment of colours and finishes. The Crosley range of turntables can play 7” and 12” records at speeds of 33.3, 45 & 78, and, to my surprise can connect to an iPod or iPhone. They range in price from £100 to £250 and come with either an EU or UK plug. UO also have a range of turntable accessories and a classic collection of vinyl singles and albums. Go to www.urbanoutfitters.com  to see the full range. I must admit, having thought I would make an investment, I was put off by some of the scathing reviews regarding their ability to perform. 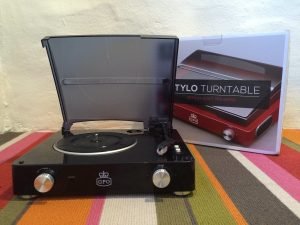 With this in mind I did some further research and found that you could pay anything from a few tens of pounds to many thousands of pounds for a serious piece of kit. Knowing that I was only looking for a machine on which to play my rather aged, and not very cared for singles collection I fell upon the GPO turntable at Argos.  Despite its ridiculously low price of £40 the reviews, on the whole, were positive. It’s described as having a retro look which I think is stretching the truth somewhat but in essence it is small, neat and, much to my satisfaction, reproduces the soundtrack of my youth. 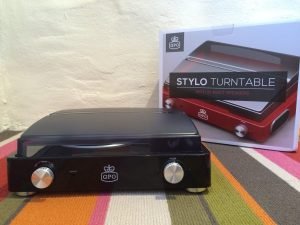 GPO turntable in black or red

To further promote the sale of recorded music this Saturday, April 18th, is Record Store Day which celebrates the UK’s independent record shops. Go to www.recordstoreday.co.uk for exclusive product releases and a list of 200+ participating stores. The organisers are calling upon recording artists to support the day and turn-up unannounced at random stores to sign any vinyl with which they are associated. It would seem that vinyl isn’t just about golden oldies as many of today’s artists are laying down tracks in this age old way. A very good example of this is Noel Gallagher’s band, High Flying Birds, who have had both the best-selling vinyl single and album in the first three months of 2015.