Hanging artwork is a work of art in itself.

I believe that a picture should make an impression. Whether hung singly, or in a group, it is important that the subject matter enhances its surroundings and doesn’t disappear into them.

I find this quite challenging but still get excited by the prospect of finding a painting, or print, that will work in a particular space or, alternatively, finding a space into which I can hang an existing  piece of art.

Scale, balance, proportion and colouring should all be borne in mind when considering what will work where. 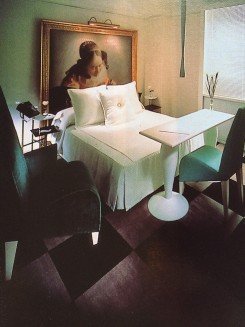 One of my favourite  examples of how these attributes can be applied is Phillipe Stark’s adaptation of Vermeer’s “The Lacemaker” in his rework of the Paramount Hotel in New York in the early nineties. Here the headboard appears to be an oversized version of the original.

Whilst, in New York I bought a large Rothko print from MOMA which has since followed me from house to house. Originally, it was bought to hang on the end wall of a lounge/dining room as a focal point. 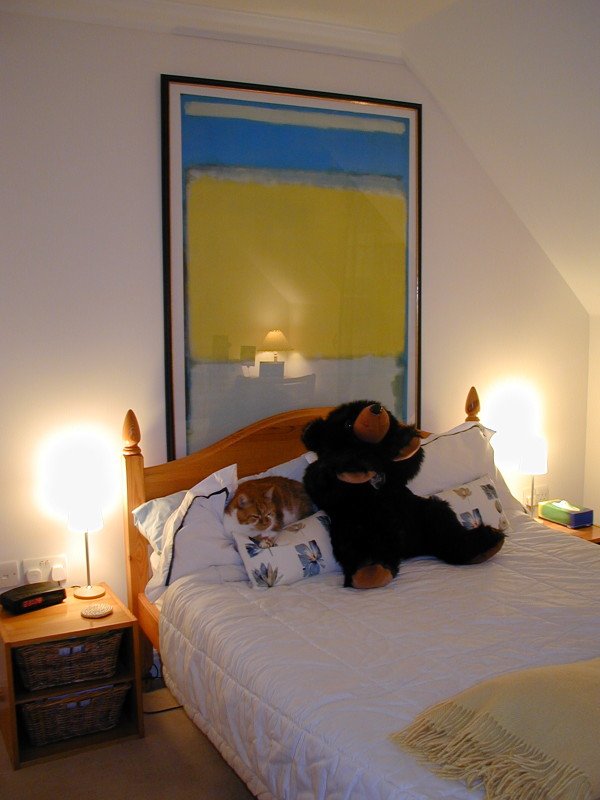 When I moved home the Rothko came too but I found it much more difficult to find a place for it. Recollecting my visit to The Paramount Hotel I decided to hang the print in the spare bedroom just behind the headboard. The colours coordinated perfectly although the scale was perhaps a little on the large side. Regardless, I was extremely pleased with the break with convention.

Where I’m living now I actually used this print as a case study as once again it didn’t easily adapt to its new surroundings. In the first instance I produced a colour rendering to demonstrate that although placed behind a wooden staircase  sufficient print would be visible for it to work. 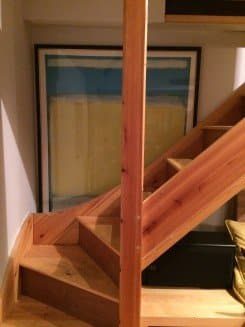 Now in situ I am perfectly happy that I’ve found a new home for this much travelled masterpiece. Today, two of my other favourite collectables, Tin Tin characters, Captain Haddock and Snowy, have joined the Rothko as an addition to the games room. 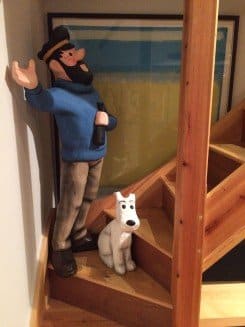 Perhaps not as sophisticated as Stark’s use of The Lacemaker in The Paramount but a good exercise in the less conventional.

To see the latest reincarnation of The Paramount Hotel New York visit http://www.nycparamount.com/