Chocolate Is For Life

Chocolate is for life – not just for Easter! 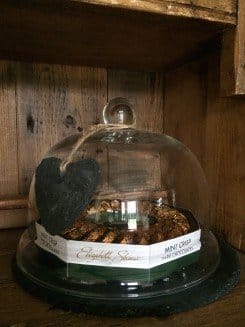 You can use chocolate and sweets all year round to add decorative details to your home. By filling glass jars, or other decorative objects, confectionary can add colour and pizzazz to your interior. 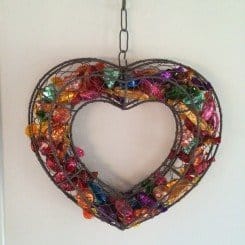 Apart from using for decorative purposes chocolate can be the main ingredient for some quick and easy desserts.

Here are two of my favourites plus a chocolate sauce recipe which can be used hot or cold on anything from fresh fruit through to ice cream, pancakes, profiteroles, steamed and baked puddings.

Poached Pears With Chocolate Sauce from The Busy Cook’s Book

Quick Chocolate Sauce from The Dairy Book Of Home Cookery

If chocolate isn’t your bag why not fill jars with a selection of retro sweets. To buy on-line go to the Card Collection’s sweet shop at http://www.thecardcollection.co.uk/collections/all 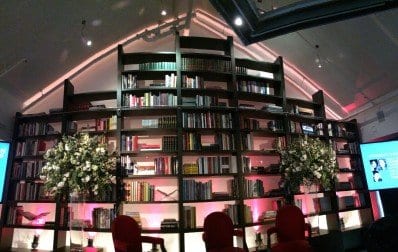 On Wednesday I pootled off to The Design Centre at Chelsea Habour for a quick update on all matters of interior design. My first stop was the Design Club on the 3rd Floor of the South Dome to listen to a talk entitled “Work, Rest and Play – Hospitality Design Redefined”. This was a conversation between three of the hotel industry heavyweights chaired by Catherine Martin, Editor of Sleeper magazine. 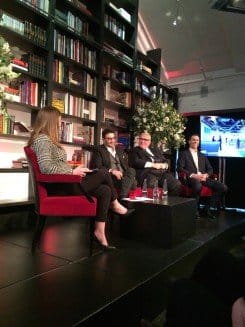 I was particularly interested as Sharan Pastiche, CEO of Ennismore, which owns the trio of Hoxton hotels, the newest of which I had stayed during my recent visit to Amsterdam, was talking. His focus was very much on making more use of the hotel lobby which is inclined to be dead space for much of the day. Ennismore’s thinking is to entice local residents to make use of the facility by providing an atmosphere akin to someone’s front room. The provision of comfortable furniture, free wi-fi, and refreshments from the bar or restaurant encourages non-residents to go into the lobby to work or to play. This in itself promotes the hotel and makes it warm and welcoming to other passersby. The hustle and bustle plays an important part in its public persona.  This philosophy has been adapted by many more hotels, both independent and large chains, as they realise that by unzipping some of the formal structure of the lobby space more people are likely to spend time, and ultimately money, in their gaff! 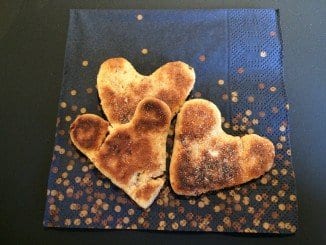 Next on my agenda was to check out the new showrooms in the Design Centre East. This wing is the home to KLC School of Design as well has the HQ of BIID (British Institute of Interior Designers). This year has seen more of the space being dedicated to specialist design practices and more showroom space. One of the major players in this space is Arte who have a fabulous display of fabrics, wallpapers, lighting and artefacts. Unfortunately, my time here was cut short as I was seduced by the smell of freshly baked cakes and coffee. Specialist design company Espresso were holding a series of demonstrations in their stupendous kitchen. I was offered heart shaped pancakes, cubes of lemon drizzle cake and Earl Grey tea. Yum! 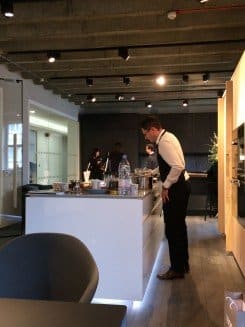 As I was enjoying the last of these delicious morsels an announcement was made over the public address system inviting show attendees to an ad-hoc workshop. In the link between the South Dome and Design Centre East Alison Coates from KLC set up shop to give a presentation, “Ten Steps to achieving Big Ideas in Small Spaces”. The twenty-five minute presentation extolled the virtues of clever lighting, informed colour choices, scaleable furniture and nifty storage. I left with my handout and headed on to the main lobby. Here a number of well known publications, including Homes & Gardens, Wallpaper and Living etc. were offering reduced price subscriptions. I quickly signed up for a six month subscription to Wallpaper and was given three free city guides to New York, London and Paris, and a tote bag as a gift!

My last assignment of the day was back to the Design Club for a talk by the founders of Patternity, Anna Murray and Grace Winteringham, in conversation with journalist and author Charlotte Abrahams. This impressive duo talked about their meteoric rise to fame and their future aspirations. Having being brought together by their mutual interest in pattern their first venture was to launch a blog which focused on their research and has since led to global recognition.  Mindfulness has been at the heart of much of their work as they believe that by opening one’s eyes to see the pattern all around helps one to see the world more clearly. Going forward they hope to apply their passion in pattern to designing environments that are genuinely beneficial. Definitely, a pair to follow.

Today is the final day for London Design Week at Chelsea Harbour and is open to all so why not pop along.

Following Annie Sloan’s illustrated instructions from her book, Quick and Easy Paint Transformations, is just like painting by numbers.

My most recent project was this chest of drawers which I rescued from my daughter-in-law. The first thing I had to do was remove the note that read “FOR THE DUMP”! 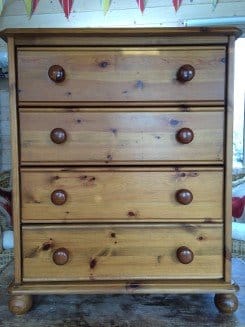 Destined for the dump

Armed with my Annie Sloan tome, two colours of her Chalk Paint™, Paris Grey and Old White, a tin each of Annie Sloan clear wax and dark wax, and a set of Annie Sloan brushes, I embarked on the transformation.

Starting with the drawers I first painted the fronts and pulls with Paris Grey. Once dried, I painted the top and bottom edges with Old White.

The next step was to apply a layer of clear wax to protect the colour. Whilst still sticky I applied a layer of dark wax. 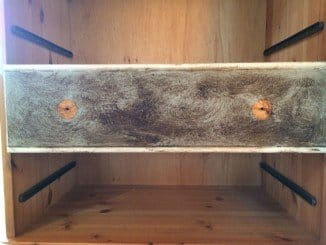 Immediately afterwards I removed some of the dark wax with a cloth leaving a discernible colour difference and some dark wax in the little nooks and crannies in the paintwork and wood.

Once all four drawers had reached this stage I turned my attention to the cabinet. I repeated the same process but this time, as per the instructions, I removed less of the dark wax. 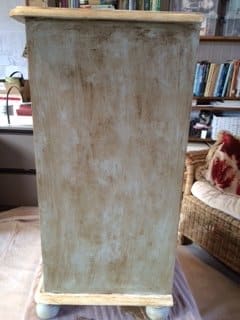 I was absolutely delighted with the finished article and couldn’t wait to put it in the guest bedroom to set off my new Laura Ashley pillow cases. 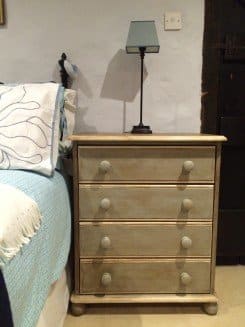 The book I used for reference covers many different techniques. This particular one was to age and distress a piece of furniture by using wax to change the paint colour.

To preview or buy the book go to: http://www.amazon.co.uk/Quick-Paint-Transformations-Annie-Sloan/dp/1906525757

I was really excited when I received my personal invitation to the private view of Haidee-Jo Summers’ exhibition at the Russell Gallery in Putney this past week.  I have long admired Haidee-Jo’s work and felt privileged to be amongst the select few at the opening of this London show.

Haidee-Jo has a rare talent for capturing light and reflection in her work. Her winter allotment scenes and vibrant seascapes are completely captivating.

Haidee-Jo’s exuberance and love of her work turn everyday scenes into beautiful landscapes. Her snow scenes emanate peacefulness and quiet whereas her rocky shorelines express the vigour and noise of the crashing waves and tidal waters.

Mesmerised by the stunning paintings on display I completely forgot to record any of the evening’s proceedings with my ever present camera but did manage to photograph one or two of my favourite paintings.

Rather than take my word for how wonderful these works of art are why not pop along to the exhibition that runs every week from Tuesday to Saturday until the end of the month. Also on show are works by fellow artist Paul Curtis NEAC.

Visit  http://www.russell-gallery.com/welcome.htm opening times, or to view more of Haidee-Jo’s work go to http://www.haideejo.com. You can also follow Haidee-Jo on Facebook or read her blog, ma vie en couleurs, to keep up to date with her latest offerings, exhibitions, courses, and up to the minute news.

The focus of London Design Week 2016 is how catwalk fashion overlaps/collides/moves ever closer to interior style. 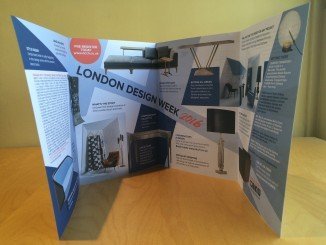 Having received my invitation by post earlier this week I immediately registered on-line and booked tickets for two of the  “in conversation events” which, in my experience, sell out in advance.

This year’s theme, Couture for the Home, is brought to life with fascinating talks, lively panel discussions, demonstrations with KLC School of Design and access to over 600 international brands in 116 showrooms.

One talk of note is hosted by editor Suzanne Imre. In conversation with interior architect and designer Christopher Dezille, interior designer Jo Berryman, and João Botelho, most recently with Donna Karan, Suzanne aims to discover how home style and catwalk fashion are becoming more and more entwined.

To pre-book tickets for this and other LDW events visit http://www.dcch.co.uk.