Hidden within the confines of a stunning walled garden between Ham and Richmond, Petersham Nurseries is well worth seeking out.

Planted beds within the walled garden

Whether you want to shop, dine, or just glean inspiration, this nursery is a far cry from your modern-day department-store style garden centre. The raised beds planted with an assortment of seasonal flowers, rambling roses, and climbing shrubs, are a joy to behold.

Once inspired by this lovingly tended garden you can buy from a carefully curated collection of plants and create your own display whether that be in freshly dug beds or neat window boxes.

One of the main attractions of this nursery is the collection of enormous glasshouses with their bare earthen floors. In one you can choose to buy from a vast selection of antiquities, gifts, homeware, and curiosities, whilst in the other you can enjoy a rare treat purchased from the adjacent teahouse. Set amongst the tree-sized pot plants are a multitude of rickety tables and chairs where you can enjoy a brief respite.

If your appetite is for something a little more leisurely  The Café is no ordinary place to dine. Open for lunch only Tuesday to Sunday, new head chef, Damian Clisby, works alongside Culinary Director, Lucy Boyd, to create an evolving menu inspired by what is growing in the garden, depending on the season.

Spring and early summer is a wonderful time to visit the nursery as it brims with new life but is still relatively quiet.

Notebook and camera in hand I eagerly joined the Discovery Trail at DCCH on the last day of London Design Week.  Hosted by Ben Spriggs, deputy editor of Elle Decoration, the trail would take in some of the biggest names in the industry.

Our first stop was at GP & J Baker where we were introduced to Threads, a range of soft, gentle, urban coloured fabrics in velvet, jacquard weaves, and sheers. Next we were introduced to Baker, a collection of fabrics with a royal influence. Images of royal palaces, courtiers waistcoats, and Hampton Chimneys were just some of the designs that adorned these heritage prints. 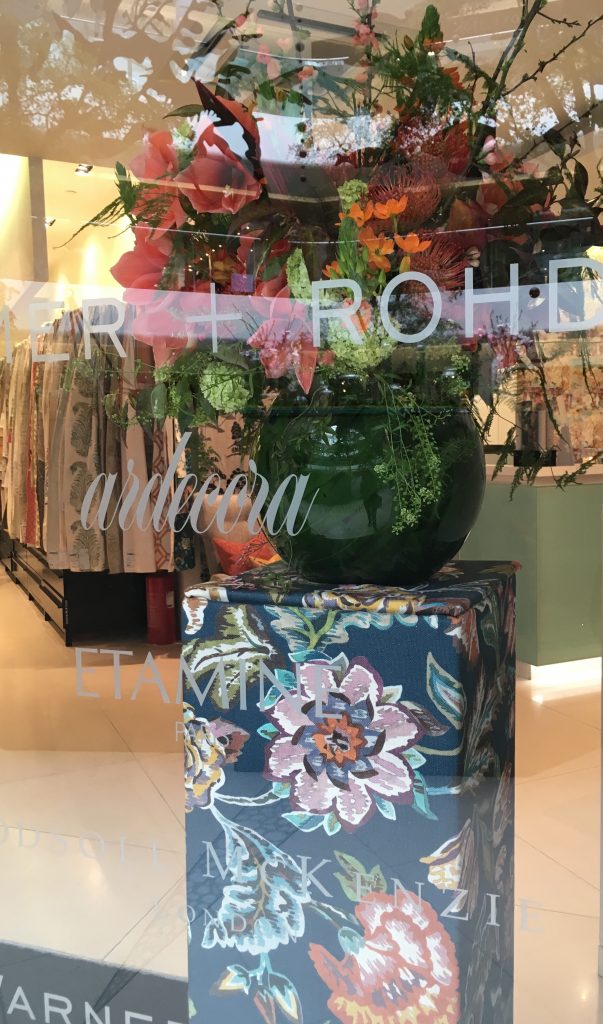 Moving on, our next port of call was Zimmer + Rhode. Here we viewed an extraordinary range of contemporary fabrics and wallpapers; deconstructed florals, raffia weaves, and fifty-seven different coloured silks.

From here we were lead, crocodile style, to Poliform to view their chic, modern, Italian designed Mondrian furniture. The expansive modular sofa sat in perfect harmony with the dark wood and marble Cosmos tables. The whole set was lit by stunning sculptural ceiling pendants.

Larsons at Colefax and Fowler

At Colefax and Fowler we were given a curated tour of their two new collections; Larsons and Manuel Canovas. The first, a collection of cool colours inspired by nature contrasted sharply to the second, which was a riot of exotic colour combinations inspired by countries linked by the Silk Road.

Manuel Canovas at Colefax and Fowler

Front was our next on the trail where we viewed their latest range of flooring which was a collection of rugs with patterns based on those of men’s suits; imagine large scale herringbones and tweeds in soft muted colours.

To round off the Discovery Trail we made our way to Turnell & Gigon where we were immersed by the eclectic British style synonymous with Soho House. Soho Home is a range of fabric, furniture, and accessories, based on the Soho House brand.

Laden with gift bags from each of our stops, and dizzy from champagne, I reluctantly said my goodbyes and thankyous and awaited my lift home.

The Design Centre at Chelsea Harbour threw open its doors yesterday to this  year’s London Design Week. With a packed programme of industry leaders taking the stage in the Design Club on the third floor of the South Dome, there is ample opportunity to glean first-hand knowledge of the world of interiors.

The Trade Preview runs until March 14 after which the show will be open to the general public from March 15-17. It is open daily between 10am and 6pm and there is no charge for entry.

Easily accessible by road or rail Chelsea Harbour is a great venue as there is plenty of on-site parking and regular trains running between Clapham Junction and Imperial Wharf.

Spending a day wandering the boutique showrooms and attending one or more of the talks or workshops is made even more pleasant by whiling away time in one of the pop-up bars or cafés. It’s a great place to meet with clients or friends.

My favourite event on this year’s LDW programme is the Discovery Trail taking place on Friday 17 with Ben Spriggs, deputy editor, of Elle Decoration. The tour will take in some of the biggest names in the industry with an opportunity to review their key pieces.

For more information on visiting LDW and for a list of events visit http://www.dcch.co.uk/London-Design-Week-2017-Programme

After scraping ice from the windscreen of my car I left home at 6.30am on Tuesday to visit the Sunbury Antiques Market at Kempton Park. Despite the chill the market was buzzing with visitors and traders alike on this bright, sunny morning. After an initial recce it was time to grab a bite to eat and a hot drink to thaw our freezing hands. It quickly became apparent that the current trend for mid-century furniture and artefacts is alive and kicking.

Not beautiful by any stretch of the imagination, but immediately recognisable as a particular moment in time, comprising of curvaceous shapes, colours, and textures, of a bygone era.

Psychedelic patterns and conical shaped lampshades, synonymous with this period, were also available to buy.

….as were these colourful jugs and vases reminiscent of the 1970’s.

Amongst the abundance of leather chairs these two upholstered chairs caught my eye with their lime green cushions contrasting with their dark wood frames.

This folding picnic table reminded me of the days when my family had a collection of Formica occasional tables in all shapes, colours, and sizes.

To get your fix of mid-century madness why not pop along to Kempton Park at the crack of dawn on the second or last Tuesday of the month when you’ll find the market in full swing.