June 30, 2018 / Carolyn / Comments Off on Colour, Competitions, and Culinary Delights

Travelling by train to Clapham Junction, followed by a short onward overland journey to the exhibition hall, could not have been easier.

It was the first time that I had ventured to the festival of a weekend and I must admit I was pleasantly surprised by the calmness.

The light and airy halls accommodated a vast array of exhibitors but there was plenty of room to negotiate each one without the hustle and bustle of a weekday visit.

This may, of course, have been due to the glorious summer that we are experiencing, or alternatively because the football World Cup is in full swing!

My friend, who accompanied me to the fair, was looking for inspiration to decorate, and update, her spacious two bedroom lateral apartment.

Both of our attentions were drawn to The Recycled Glassware Co whose stand featured these gorgeous table lamps and botanical shades. Prices were reasonable, and choices immense with various shapes, colours, sizes and flex to mix and match. 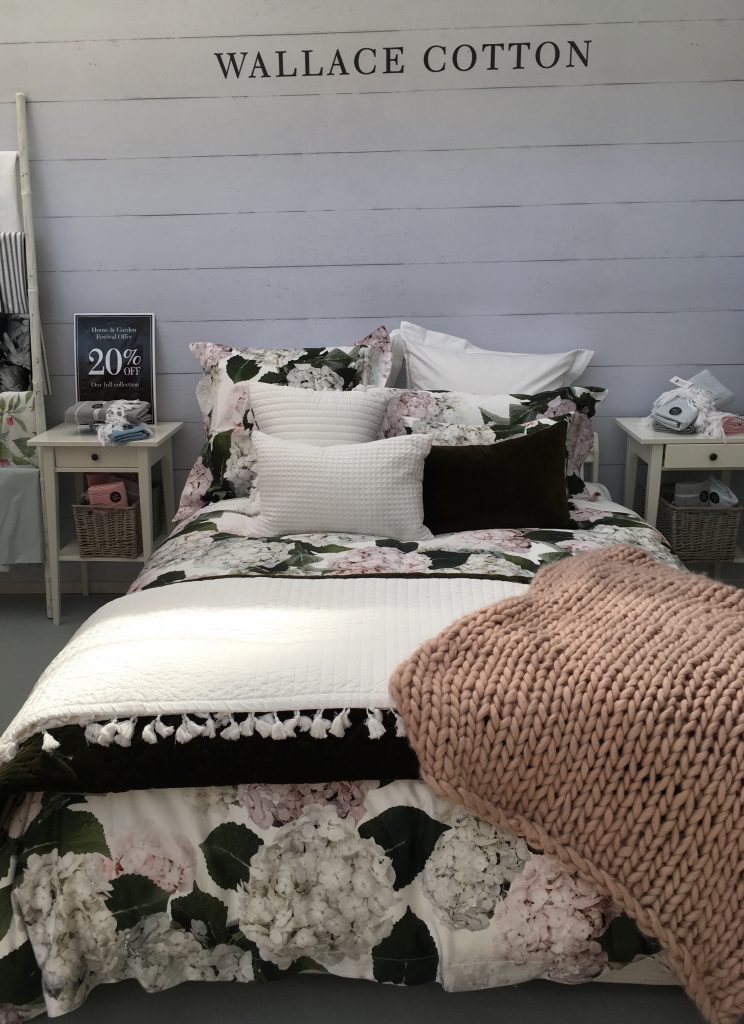 Next my attention was grabbed by Wallace Cotton as I had seen many people wandering the show with Hydrangea-print totes. The bedlinen, featured on the bag, was up for grabs in a prize drawer. Irresistible! 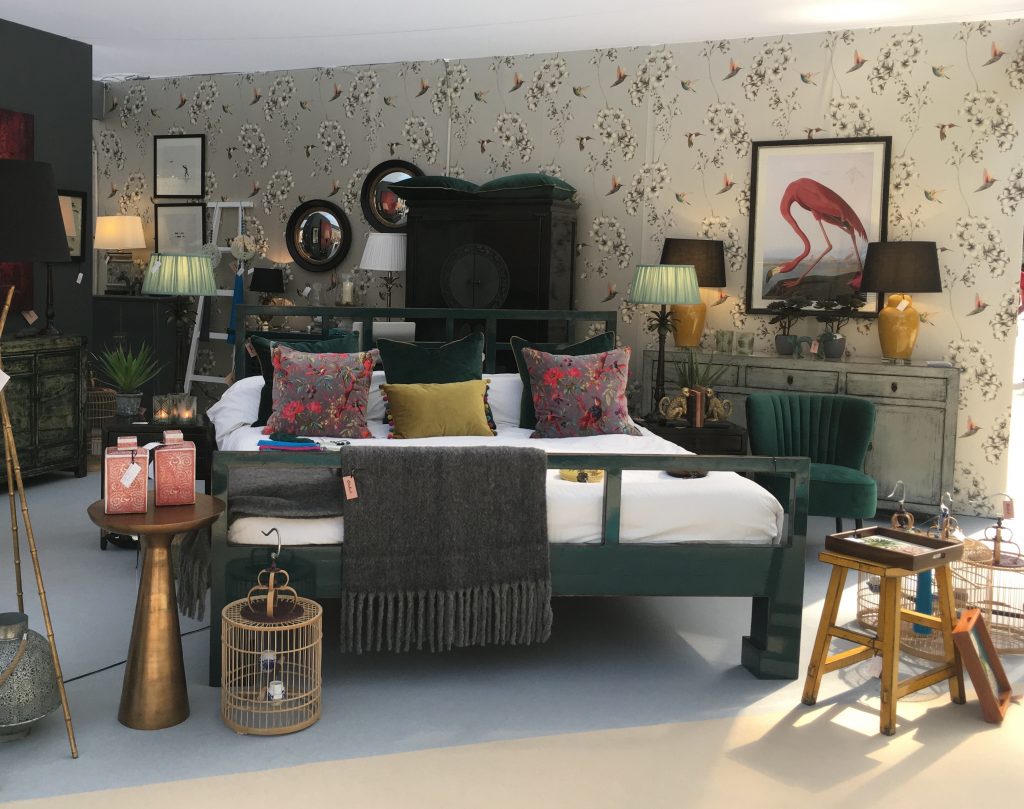 Pattern played a large part in the show. Contemporary and classic sat side by side providing inspiration for some playful interiors and room sets.

I couldn’t ignore these colourful characters on Charlotte Gerrard’s stand; they were adorable. As were this pair of chimps who looked as though they had done far too much walking around the hall.

Taking our lead from them we ventured to the first floor mezzanine to revive ourselves with some culinary delights.

Bombarded with an array of health boosting, rejuvenating, and turmeric lattes that could guarantee instant pain relief, we settled for a small Stinging Nettle gin liquor. Now that’s what I call a “pick me up”! 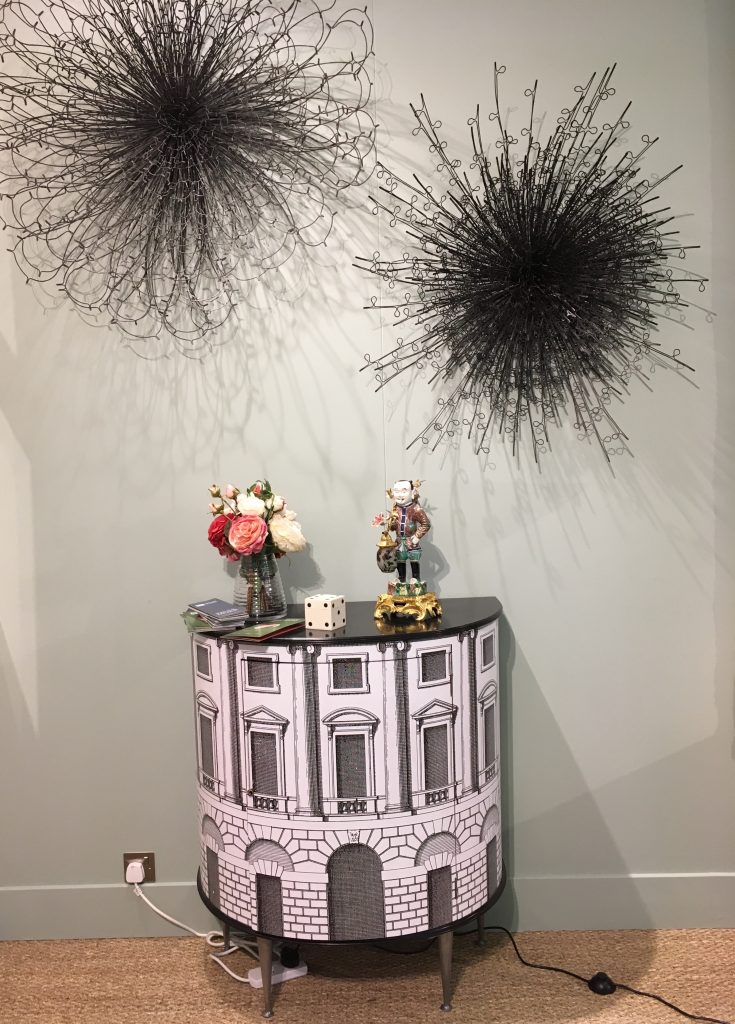 Suitably refreshed, we wandered a while longer before ambling gently towards the exit. On the way we passed the Edward Bulmer natural paint room set where I took a particular fancy to this console table and wall-art combo.

Unwittingly, we hadn’t realised that full range of Edward Bulmer colours adorned the entrance/exit tunnel in the form of a cylindrical paint chart.

Design inspiration can come from the most mundane and unusual sources.

Whilst sitting at my desk this week my attention was drawn to this yellow door which I could see from my office window. The reason  my interest was piqued was due to the fact that it was being painted. Once the renovation was complete the sunshine yellow suddenly jumped out from the red brick building.

Having recently completed the redecoration of my kitchen I had been pondering the problem of table settings; in particular “place mats”. The ones that I had been using, although infinitely practical, no longer looked the part.

Funnily enough, as a temporary measure, I had replaced them with some black rubber mats which looked far more contemporary, and were actually commented on by a friend.

Unfortunately, they did not make the grade due to the nature of their construction, which, I soon realised, allowed crumbs to seep through onto the wooden surface beneath.

By now I’m sure you’re wondering why I am talking about place mats in the same breath as a door!

The answer is that I have some “sunshine” yellow place mats which I thought might be the answer to my dilemma. Not only will they add a splash of colour to the décor but they will also compliment the Emma Bridgewater tea set that I use on a daily basis. As an added bonus I found some matching napkins.

To celebrate my lovely new kitchen, which, by the way had been enhanced even further with the installation of these stunning reclaimed pendant lamps, I unwrapped my Bettys Tea Shop birthday gift and enjoyed a splendid cream tea.

Keep eyes open at all times, as inspiration is all around, and can be found in the most weird and wonderful places, often when least expected.