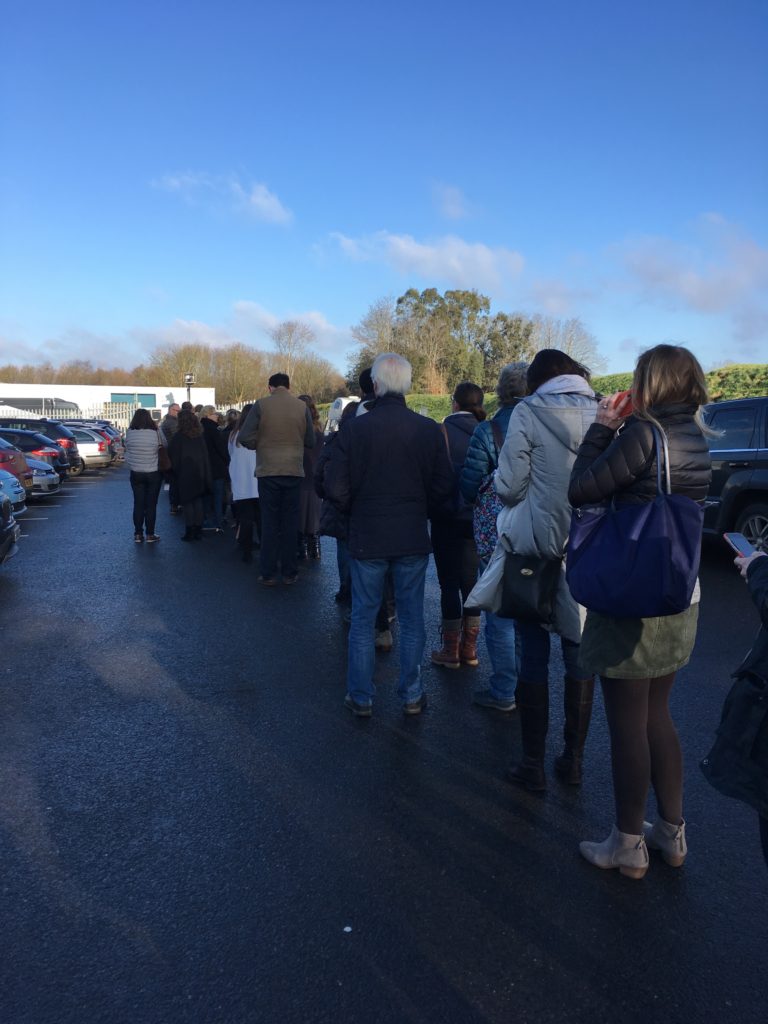 I had hoped to be writing a stunning account of the “by invitation” Neptune Warehouse Sale that I took time out to attend yesterday. Sadly, this isn’t going to be the case as, having arrived at the appointed time, the car park was full to overflowing and the queue for the event already stretched out beyond the warehouse gates.

My only optimism was that the queue did appear to be moving so my partner and I decided to join the already chilly masses. After fifteen minutes of remaining static we decided that one of us should go back to the car as it was parked on double yellow lines, and one of us remain in the queue to preserve our place. We both checked that we had a phone signal and agreed that we would update one another electronically as the queue progressed towards the building.
Within moments the queue surged forward and I quickly sent a text to that effect. Dutifully my partner returned and stood by my side as we came to a rapid standstill! He left – and returned to the car.
I made small talk with the other people in the queue. How had I heard about the event? Was it the first time I had been? Had I travelled far? It would seem that although the event was not publiscised on the Neptune website it was not the exclusive event that we had imagined.
Our hopes lifted as people started to appear leaving the warehouse laden with bargains. They quickly loaded their cars and drove away, leaving one or two parking spaces in the now very crowded car park. I sent a message – “there’s a space now – bring the car round”. The response came back “they’re stopping all the cars from entering – it’s manic out here”.
Another surge in the crowd, and suddenly I’m through the gates and almost entering the marquee which was obviously erected, to provide shelter, for the attendees. I sent a message “we’re on the move – come now”. This time, my now very bored partner, arrived with provisions – Kit Kats and water – and joined me in the queue. Not long now, I thought.

Once inside the tent it became apparent that there was no comfy seating, hot drinks, or friendly welcome, just several aisles ensuring that everybody remained in an orderly line. A smartly dressed Neptune employee did arrive with an armful of brochures, I presume for anyone who needed to be reminded why they were stood in a queue on a cold January day looking at the backs of several hundred people who all thought they were there by “invitation”.
My spirits lifted as the queue moved forward quite quickly and we were now only about numbers 101 and 102. We circumnavigated a basket of “treats” that had been thoughtfully provided, but I passed on these as I had been lucky enough to have an even more thoughtful partner who provided the much needed chocolate fix.

We continued to wait patiently – surely it would be our turn soon. Another surge – no, just a small handful of people are let out of the holding area and into the warehouse. We seemed so close, yet so far. My feet are starting to get cold, and those around me without coats are beginning to shiver. The clouds are gathering in more ways than one.
After two hours of queuing realisation is beginning to hit. Is there going to be anything left by the time we are admitted to the revered warehouse? Is the queue to pay for any purchases going to take as long as the time it has taken to get in?
At last, we start to move again. We are the very last ones that they allow through on this particular turn and we hurriedly make our way up the steps before they have a chance to turn us away.
On entering, we are greeted by the sight of a very normal warehouse. Floor to ceiling racking full of large brown boxes, each concealing their contents, but being tended by hi-vis clad staff. Another member of staff in a pink hi-vis jacket informs us that if there is anything in the way of furniture that takes our fancy we should ask for the help from one of the “pink” assistants.
We look around. The floor space in front of the racking is sparsely populated with around a dozen similar sofas, a handful of dining tables, quite a number of partially boxed dining chairs, and a few random stools. As we venture beyond this immediate collection we find that there is a bedroom section to one side and a kitchen section to the other.
My heart sinks. My carefully made notes of the items that I might like to acquire is useless as nothing here matches my aspirations. We wander into the “accessories” area where I had hoped to pick up a rug, and perhaps some ex-display curtains. There were none; rugs had all gone, and I didn’t have the heart to ask about window dressings.
On the bright side, there were numerous faux flowers, candles, and lampshades. There was however yet another queue to pay, and when we enquired as to why we had spent so long waiting outside, we were told that it was due to the fact that it was taking so long to process payments.
We left. Any enthusiasm I had had when I left home that morning had evaporated. We had driven for and hour and half to get there which is why I felt it imperative to at least see what was on offer. My partner, by now, was really relieved when I resisted temptation and didn’t pick up a token purchase just to make the trip worthwhile.

Instead we wandered into the adjacent showroom, admired all of the beautiful room settings, used their facilities and made our way back to the car. On inspection we noticed that we hadn’t received a parking ticket, so at least that was a bonus.
As we unlocked the car in readiness to leave a reporter from the local paper asked whether we had been to the Neptune sale? Had we bagged ourselves a bargain? We held out our hands wearily demonstrating that we had completely failed in our plight. He asked how far we had travelled and gave us a sympathetic look as he scribbled some shorthand on his reporter’s note pad. Word of the sale’s popularity had obviously provoked enough interest for the Press to become involved.
I’m not knocking the Neptune brand at all, nor the fact that they chose to hold a two day sale to clear the decks for new and exciting stock. What I am a little disappointed about was the lack of communication on the day with regards to wait times and expectation. In future, I will know, that if I receive another “invitation” I will make a phone call and seek clarification with regards to what it actually means. At least that way I will be able to make an informed decision as to whether it is worth my while attending, or not.
By the way, I did ask my partner, if we could stop at the Reading Ikea on the way home. I can’t actually print his reply! 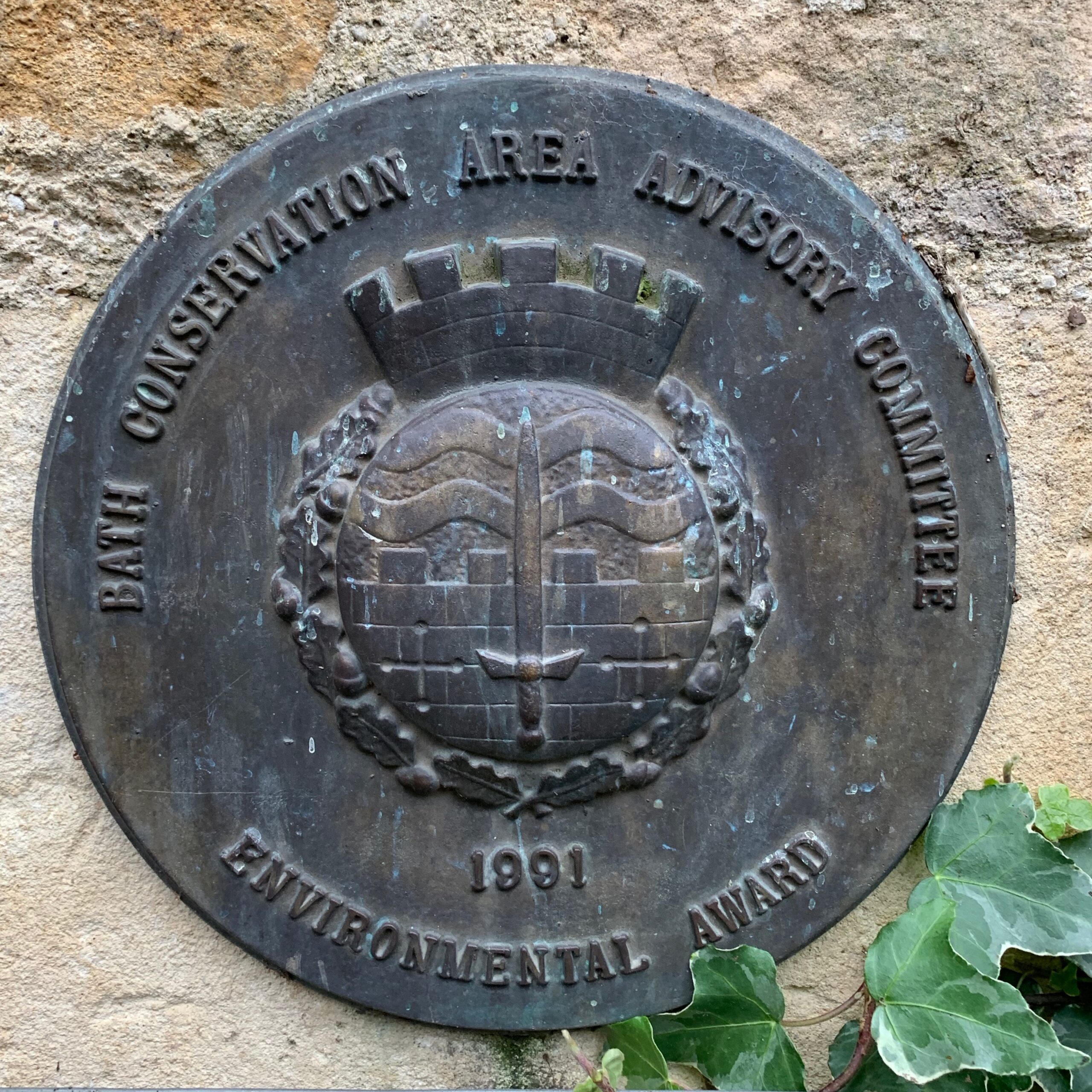 A recent excursion to the West Country gave me the perfect excuse for splashing out in Bath. Whilst glamping on Mill Farm in Paulshot I took a short trip to the nearby Roman Spa town… 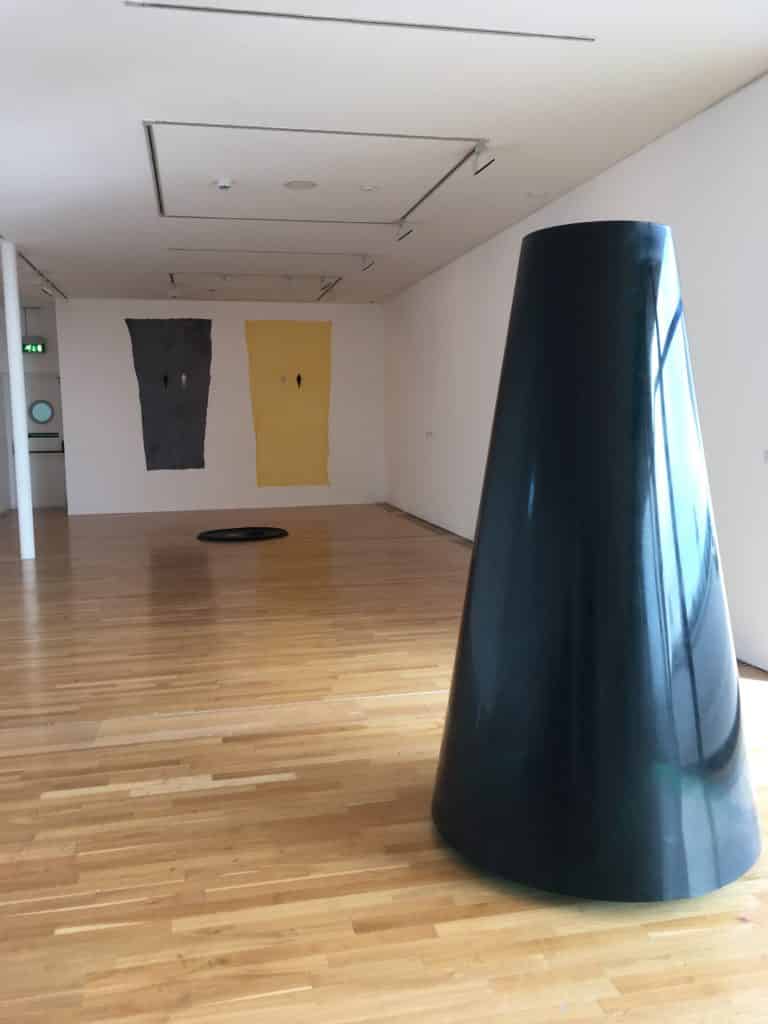 It’s not often that I take time out at the weekend but when the opportunity presented itself to me this morning I thought why not? Yes, I had a hundred things planned, and yes I… 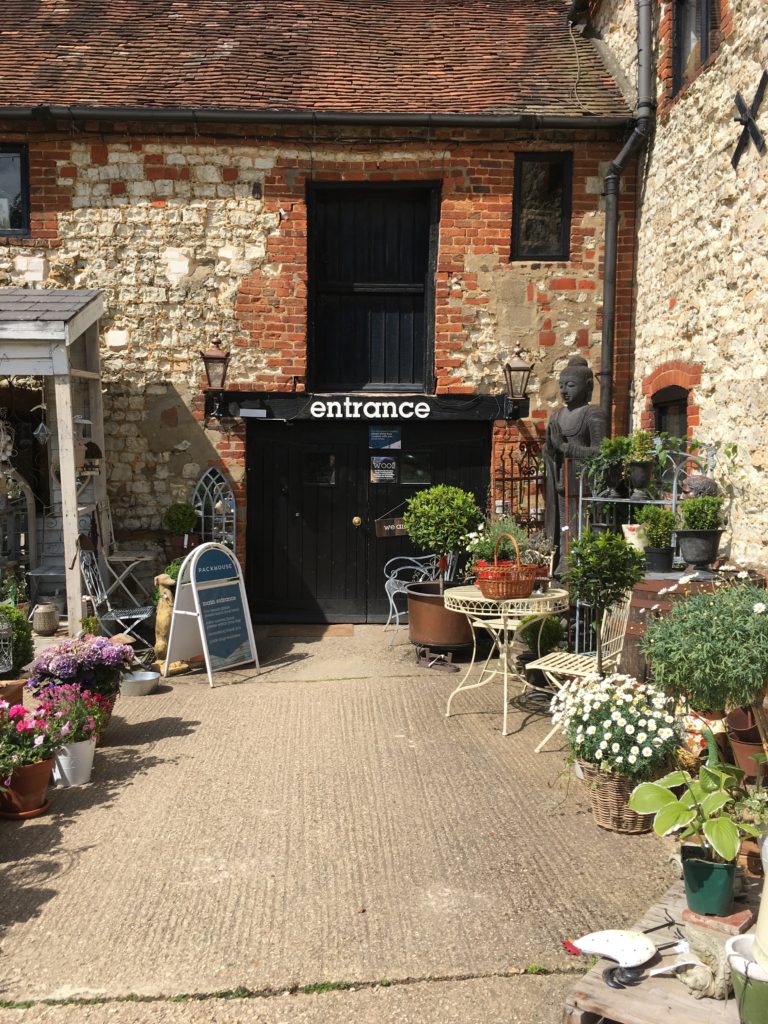 In a ramshackle building in the tiny village of Tongham you will find Packhouse. I’m not sure how it’s name came about but it describes perfectly this “house” which is completely packed with stylish hand…

Unless you’re a seasoned sailor I’m not sure that you would venture into Cowes on the Isle of Wight on a particularly wet November afternoon. Not so! Finding myself with time to kill having arrived… 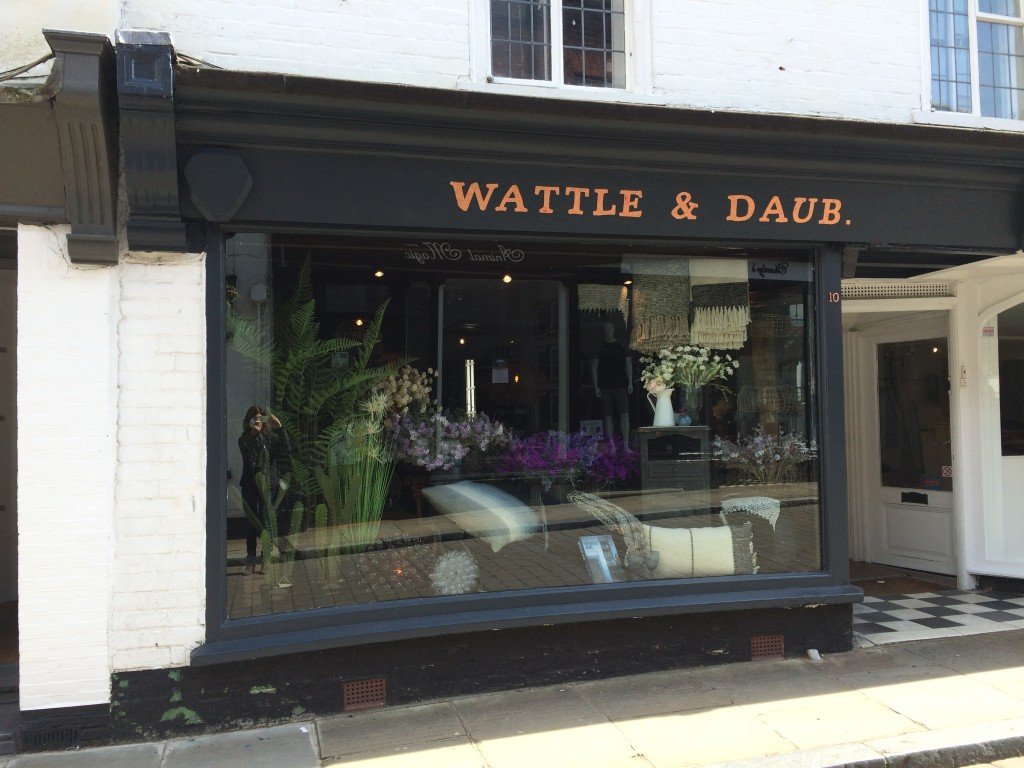 What could be nicer than finding yourself in the heart of a thriving town packed full of wonderful shops. It was my good fortune to find myself in gorgeous Godalming in Surrey this sunny day… 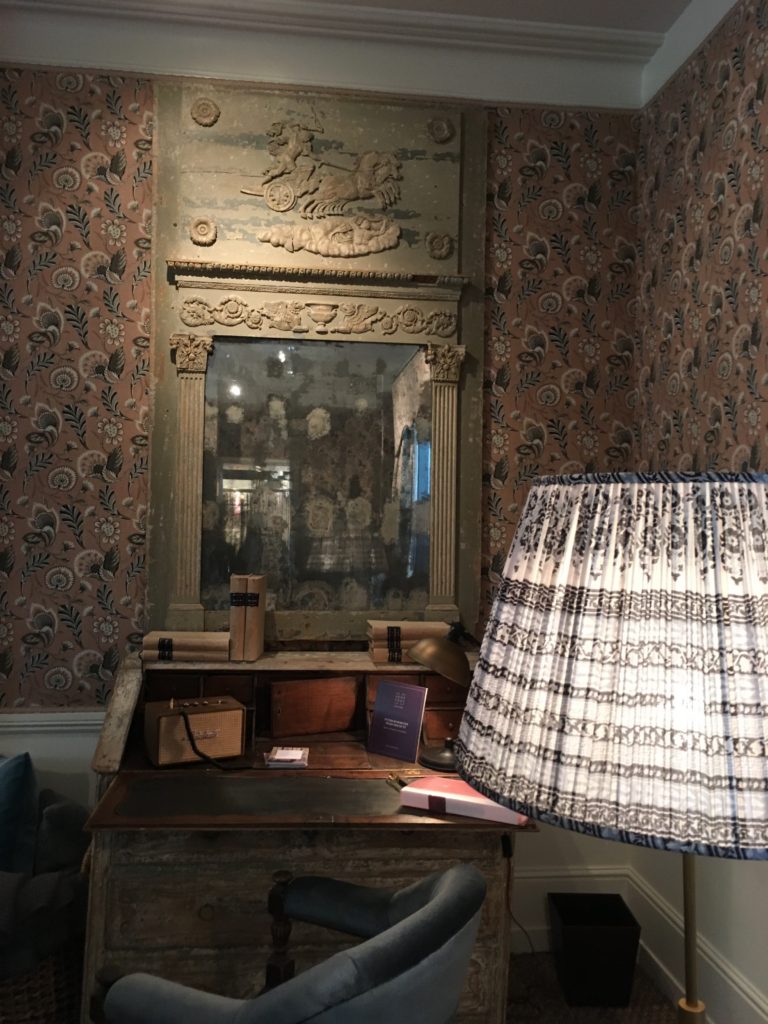 My Discovery Trail blog of March 19 made reference to Soho Home, the interiors offshoot of Soho House. Reading the August edition of House & Garden magazine I note with interest that Soho Home have…